Women still lag behind men in the arts – especially in leadership roles. Hilary Carty looks at the issues that lie behind the figures 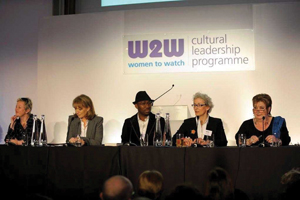 The issue of women in leadership elicits strong, often contradictory opinions. Whilst some lament the lack of female role models and a decline in priority actions, others list a stream of high profile women as evidence of progress. To fill the void of empirical evidence the Cultural Leadership Programme (CLP) commissioned ‘Women in Leadership in the Creative and Cultural Sector’ in 2008. The research showed that, despite a strongly heterogeneous cultural sector, the leadership of the sector remains distinctly male. There are 2.5 male leaders to every female leader and, although women are prizing their industry qualifications, their male counterparts are pushing to the top regardless. One statistic I found particularly intriguing was that only 75% of women see their future as senior leaders (against 100% of men): is that due to a lack of confidence? An unwillingness to enter the macho ‘bullring’ of male management teams? Or are women making an empowered choice to ‘have it all’ – mixing family and career in a life-style decision that asserts a healthy balance of power and profile? Dr Donna Ladkin’s research1 indicates all of the above.

In the two years since we commissioned that report, the issues have remained complex. With few women expressing a desire for women-only provision, CLP has had to find more nuanced ways of strengthening the numbers, and two approaches have proved particularly effective – CLP Networks and the Women to Watch (W2W) campaign. Women have responded well to networking opportunities, making effective use of this ‘safe-space’ for raising and weighing up potentially subjective responses to tricky situations – “Is it just me, or am I being unfairly treated here?” Networks allow the issues to be openly aired, whilst collective viewpoints inform a strategic response. This, in turn, enables women to build confidence and be properly assertive. Both the Music Leaders and Women in Museums networks are credited with providing significant support for their members, whilst the highly diverse Women of the World (WOW) Network, led by Jude Kelly, is sharing cross-generational and cross-sector experience.
WOMEN ON TOP
W2W profiles 50 of the sector’s most talented emerging and mid-career women leaders, nominated by established professionals and selected by judges including Jenni Murray, Dame Liz Forgan and Wayne McGregor. We deliberately pitched the nomination process for a high profile press campaign – to get the sector debating the issues and being proactive in noticing and acknowledging the women around them. It was not without its naysayers, who questioned the competitiveness of ‘lists’ and the wisdom of profiling so few. We were very conscious of the potential for negative impacts and conscientious in creating a selection process that opened the door for talent and achievements to be recognised in their many forms. But the list is just the starting point and we have crafted a programme including mentoring and coaching, high profile sector champions and peer networks to support and nurture the W2W.
It is, as yet, too early to get a meaningful trend analysis from an update of the research and that is slated for 2011. Nevertheless, it would be naive to believe that the job is done. Still, anyone in a room with CLP’s Women to Watch will recognise the hope that leaders of the future will be sufficiently well equipped to deal with the cuts, not just of the imminent spending review, but the aftermath and impact on creativity as well as jobs.
With the tightening of belts will inevitably come a squeeze on part-time jobs and flexible working – which is why the Fawcett Society is seeking a Judicial Review of the Government’s recent emergency budget, citing that 72% of cuts will be met from women’s incomes. If we are not to lose this critical section of the workforce, it will be imperative to combine emergency survival measures with strategic thinking to take the long view. And ‘feminine’ leadership, typically characterised by balance, transparency, fairness, social responsibility, accountability and sustainability offers that long-term thinking.
The old macho leadership models no longer work for women in leadership roles – nor do they work for men! So, since change is imminent and lasting, what better time to look again at leadership and update the norms of work-life-balance, flexible working and career progression? Break the mould rather than tinker at the margins? The benefits will be a diverse and more multi-skilled workforce, meeting sector challenges with additional talent, broad experience and huge commitment. What’s not to like?