With Creative Scotland due to be launched next month, following several years of political wrangling and rebellion, Eleanor Turney finds out from Chief Executive Designate Andrew Dixon what happens next. 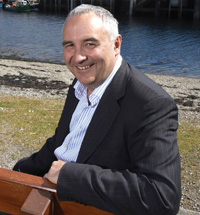 Creative Scotland’s (CS) creation has been a bumpy ride, but Andrew Dixon is confident that the new quango will be “the right model for Scotland”. The new body set up to support Scottish arts is being constructed through the contentious merger of the Scottish Arts Council (SAC) and Scottish Screen, after years of to-ing and fro-ing with the Scottish Parliament and the arts sector. Dixon himself is new blood. He was previously in charge of the NewcastleGateshead Initiative, the marketing agency that promotes the region as a place of culture-led regeneration, and prior to that he was Chief Executive of Northern Arts and a member of the national executive team of Arts Council England. Dixon freely admits to not having spent much time in Scotland prior to his appointment, and brings a (perhaps necessary) outsider status to the role, as well as a wealth of experience.

With NewcastleGateshead he learnt that “artists and arts organisations are at the heart of everything”, and also how to “package and promote arts and culture”, properly. The ingredients, he says, are all there in Scotland, but it is CS’s job to “shine a light on all the hidden gems” as well as to take risks. Dixon enthuses about the “phenomenal energy” he has already encountered in the Scottish arts community, and sees his role as one that should be “keeping the momentum and building momentum”. However, he insists that he is not just planning more of the same: Dixon says that CS aims to “develop a different model of working” when it comes to funding and supporting Scottish arts. CS will have a “much more flexible way of working… taking a holistic view. We will carry artform specialists, but they will also have a higher responsibility for an area of geography, and for projects such as the Commonwealth Games or capital projects.” He is clear that the body will have as wide a remit as possible, and will “promote everything, whether we fund it or not”. There are several mentions made of CS being “a rallying call, not an institution”, but despite the repetition, he remains a little woolly about what a “rallying call” might actually mean in practice.

SCOTCH MIST?
CS’s new head has not been in post very long – he is in charge of a national organisation that does not technically exist yet – but it will be interesting to see whether the sound-bites will translate to a genuinely new vision, or are just enthusiastic rhetoric. Dixon is keen to “create a different language about how we spend money”, choosing to refer to the money CS gives away as ‘investment’ not ‘subsidy’ or ‘funding’”. Sceptics will note that it is going to take rather more than a change in language to introduce a new way of working and substantially differentiate it from, say, SAC. If a change in language truly reflects a new way of thinking, then all is well, but changing the language does not change CS’s relationship with the arts sector – at its heart CS is still a large public body with millions of pounds of public money to distribute. That’s not all it does or will do. CS also calls itself “advisor, advocate, investor and broker,” but whether you call it investment, subsidy or funding, money has to get from CS into the bank accounts of arts organisations somehow.
The Scottish Government lost £332m in last week’s efficiency savings. It has deferred making these cuts until next year, which will leave Scotland facing budget cuts of around £1bn. I suggest to Dixon that all of his hard work now, particularly soothing the arts sector, could come to nothing if the financial rug is swept from under his feet next year. But he is upbeat: he suggests that the Scottish Government’s decision to directly fund its National Companies (which has been successful [AP217]) demonstrates its commitment to the arts, and tells me he is “getting every message that the Scottish Government is committed to Creative Scotland”.
This potential uncertainty makes Dixon’s role itself a tricky one – is he a messiah or a guinea pig? “Scotland is a little bit different” from the other UK countries, he thinks, with “distinctive cultural differences”. He has to get his head round them pretty quickly and make CS a body that works with a sector that is wary of the change. There is a fear that the new body will be leaner, and therefore meaner, but this does not have to be the case. In his first few weeks in the post, Dixon has spent time talking with, and listening to, the arts sector. He is aware of comparison with other countries’ arts bodies, and acknowledges that “people will be watching” to see how it turns out.

FUTURE FUNDING
In his hands, CS has the potential to change the traditional funding model and also to become a model of best practice. However, unlike the arts quangos in England, Wales and Northern Ireland, the new body no longer mentions ‘arts’ or ‘culture’, but rather concentrates on the all-encompassing ‘creative.’ Dixon defends this decision: “’Creative’ and ‘Scotland’ are good words”, he says. Well, yes, but so is ‘arts’. The jury is still out as to whether CS’s broad scope will prove to be its greatest strength or biggest weakness. Only time will tell whether such scope gives CS, and its Chief Executive, a deep and thorough understanding of the entire cultural sector in Scotland, or whether it stretches already-thin resources too far. In any case, now that the ball is finally rolling, Scottish arts organisations should sleep better – after all, CS has been too long in the planning to fail now.

ELEANOR TURNEY is Editorial Co-ordinator for ArtsProfessional.
e editors@artsprofessional.co.uk
w http://www.artsprofessional.co.uk
This week Eleanor experienced some rather bizarre and not-entirely-successful immersive theatre in Bristol, in which her Mum was handcuffed to a German woman in a casino. She continued to battle through AS Byatt’s ‘Possession’, and is looking forward to ‘Yes, Prime Minister’ at the Chichester Festival Theatre next weekend.