This week sees the publication of the Arts Council of England?s strategy and report on street arts. Will this document help to bring a marginalised sector into the funding system, asks Maggie Clark.
In July 2001 the Guardian published an article by Lyn Gardner called ?The Outsiders?, which looked at the state of street arts in the UK ? celebrating its growth despite under-investment and laying down the challenge to the Arts Council of England (ACE) to address the needs of the sector in its imminent strategy document for street arts. The article was welcomed by the street arts community, as it is almost unheard of for the arts pages of any quality paper to pay any attention to street arts, let alone to champion their cause.

The Outsiders is an apt name for this sector. Not only is the work performed in the open air ? literally outside the physical and artistic confines of traditional arts spaces ? but it also exists largely outside the arts funding system and beyond the critical eye of the arts press and media. How different to the situation in mainland Europe.

At the x.trax Festival and Showcase in Manchester we see a microcosm of street arts in the UK presented alongside the best international work, plus a range of contemporary indoor performances, all in front of huge audiences that include promoters from all over the world.

In 2001 the street festival encompassed new circus, spectacle, dance, a diverse music programme, theatre, visual installations, live art, pyrotechnics, puppetry, and numerous strolling and static street companies, plus artists who are relatively new to street work, attracted to the sector by the opportunity to take their work out of traditional arts spaces and to the larger and more diverse audiences that typically attend street festivals.

The sheer diversity of forms and styles in the street festival is impressive, but what of the artistic quality? Street arts is something of a catch-all term to describe a range of activity made for outdoor spaces. With most street festivals having an entertainment agenda as well as an artistic one, promoters often have to book work that will entertain the crowds as well as meet an arts objective. Quite a challenge for artists and promoters! 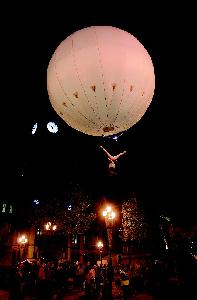 In x.trax 2001 there was plenty of UK work that met both those agendas. A few examples illustrate something of the range. The opening night event saw Dream Engine?s magical Heliosphere, a trapeze artist performs above the crowd, hanging beneath an illuminated helium balloon that moves over the heads of the transfixed audience. This was followed by Avanti Display?s Hydromania, an ironically humourous spectacle that saw the front of Manchester?s historic town hall turned into an enormous fountain, water pouring from every edifice and gargoyle. It says a lot about the recent development of street arts in the UK that this piece was co- commissioned by MIA for x.trax and the Royal National Theatre.

We also featured new work by British group IOU, one of the few ACE funded companies producing street work. They move seamlessly between indoor locations and the street, bringing elements of street performance to their large-scale indoor shows and installations, and their distinctive aesthetic and design wizardry to all settings. In addition, there was Walk the Plank?s fire installation with pyrotechnic animation and ambient performance; the Whalley Range All Stars? intimate show for ten people at a time called ?Headquarters? which is an installation designed to separate the head from the body in a unique theatrical fashion; plus an evolving installation by Storehouse, commissioned by Arnolfini in Bristol as part of a live art programme, which sees two artists based in a mobile caravan curating and displaying objects found and donated by the public.

330 promoters from 23 different countries attended in 2001 and over 180 companies performed. In the last two years over 80% of the artists who have presented work at x.trax have gained further bookings as a result, and the number of visiting promoters keeps increasing.

With x.trax we use the accessibility of street arts to help build audiences and profile for other less immediately popular art forms. With the support of North West Arts Board, who quickly grasped the strategic potential, we have developed a highly successful cross artform showcase on the back of a popular street festival. The street festival remains the central core of a much larger showcase that now works with all the major venues and promoters in Manchester to present a range of performance work both inside and outside.

It is not uncommon to hear representatives of the arts funding system talk about the poor artistic quality of UK street work and point out the preponderance of entertainment-driven acts in the sector. But with arts funding making up only 2% of funding for street events, according to research by the Independent Street Arts Network, 2001, perhaps we should be more surprised that UK street work is as diverse and challenging as it is.

If the funding system has been slow to recognise the value and impact of street arts in the UK, then the arts press has followed suit. Whilst our press cuttings files are full of positive news features, and we regularly gain TV coverage, it is hard to get the arts media to engage with the work. Not every street artist would want or expect to read about their shows in the arts pages, but there are plenty of practitioners who welcome the chance to have their work debated in a critical arena. Which is why the forthcoming ISAN symposium (see below) and ACE?s recognition of the sector with a strategy is so important.

We are fortunate enough to be named beneficiaries of ACE?s theatre review, though only three Regional Arts Boards gained money for street arts projects. Perhaps the new strategy will encourage more investment in artists to create street work, facilitate more opportunities for its presentation in the UK, and argue that street arts be valued more highly.

x.trax 2002 has been cancelled due to the local authority?s inability to confirm funding. The next x.trax will be in 2003, and in the meantime the website is being expanded and continues to be a free resource for artists and promoters.