An information line is to be launched to help those working in the arts sector find out about training opportunities. Metier, the national training organisation for arts and entertainment which has initiated the venture, is now inviting training providers to submit details of the opportunities they offer. e: martin@metier.org.uk

National Children?s Art Day 2002 is to take place through the UK on June 20, and will involve many of Britain?s national galleries and museums. The event will include the presentation of the annual ?Artworks: Young Artists of the Year Awards?, funded by the Clore Duffield Foundation, which aim to reward inspiring and creative teaching and learning in art and design. w: http://www.art-works.org.uk

The findings of a survey to investigate the behaviour of cultural website visitors has been published, by McKinsey & Company, which has been engaged in the UK by the Department of Culture Media and Sport to develop ?Culture Online?. The research reveals the demographics of users of cultural websites, their reasons for visiting, what users do when visiting a site, their likes and dislikes and what might compel users to return to a site in the future. w: http://www.cultureonline.gov.uk/html/ drummond_madell_col_files/frame.htm

The Royal College of Organists, the professional body for the promotion of organ and choral performance, is to relocate from its London home to new headquarters in Birmingham?s Eastside. The College hopes to take up residence in the former Curzon Street Station, a Grade 1 listed building.

Volunteer artists are being sought from a broad range of disciplines to work with pupils, in the Big Arts Week, a new initiative open to all primary and secondary schools in the country, taking place from June 15-22. Brainchild of National Poetry Day founder William Sieghart, Big Arts Week aims to encourage those already involved in the creative industries to inspire the next generation of artists in their local communities. w: http://www.bigartsweek.com

The AHRB ?Changing Places: hosted visits? scheme, which promotes and supports collaboration between researchers in academic departments in the UK and colleagues who work in arts organisations or similar environments, is inviting applications for its latest funding round by April 30. For guidance on eligibility for the scheme w: http://www.ahrb.ac.uk

Bookmakers William Hill and Blue Square have both made Belfast favourite to be named European Capital of Culture in 2008, with Newcastle and Liverpool close behind. Milton Keynes, the only town in the 13-bid race, is the rank outsider.

Research to assess the type of audiences attending arts events funded under the New Context strand of the New Audiences programme has been published by the Arts Council of England. The fund supported arts activity which placed art in non-traditional spaces such as night clubs. w: http://www.artscouncil.org.uk/ publications/pdfs/contexts.pdf

A training and information resource in theatre-based participatory development techniques is being launched by the Centre for Applied Theatre Research at the University of Manchester. The manual and video will be distributed to development workers and organisations interested in integrating theatre techniques into their practice. Contact Julie McCarthy, t: 0161 275 3784 e: julie.mccarthy@man.ac.uk

The Arts Council of England is undertaking an audit of family friendly arts activity in the UK. The research will include a literature review, best practice case study highlights and a report on the key issues in developing family audiences in the cultural sector. For details contact project consultant Pam Pfrommer
t: 01274 678014
e: pamelapfrommer@netscapeonline.co.uk 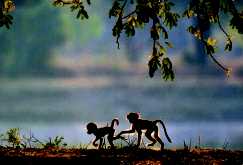 A record 1 million website hits have been recorded on the launch day of the BG Wildlife Photographer of the Year Competition, organised by BBC Wildlife Magazine and the Natural History Museum, London. The competition, which has for 18 years been drawing photographic art to the public?s attention, attracted 19,000 entries from amateur and professional photographers in 60 countries. w: http://www.nhm.ac.uk/wildphoto