The entry-level ?bronze? membership scheme at Malvern Theatres can be described as a subscription scheme, writes Fred Moroni. 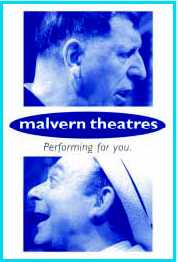 For a £35 annual fee the buyer enjoys advance notice of productions and a few days of priority booking. On top of that, a ticket discount amounting to £2 per ticket (on up to two tickets per performance) is offered on most shows in the two main auditoria. £1 off each of a pair of cinema tickets per week may also be claimed, as may a free half bottle of house wine in the theatre restaurant on certain days. In short, the most enthusiastic theatregoer will quickly recover the annual fee and go on to save a good deal during the course of the year.

The bronze membership scheme was introduced some four years ago when Malvern Theatres re-opened following a £6m Lottery refurbishment. Prior to closure, a more traditional ?buy all six plays and get 15% off ? type subscription deal was in place. The bronze membership, despite including the initial membership fee and although offering roughly the same discount to the average member, is more than ten times more successful than the older scheme. This is because of its simplicity and flexibility. Patrons don?t have to decide immediately which performances they want to come to. Nor do they have to pay in one go. Percentage deals can make it hard to calculate the saving. Still worse in this respect are subscriptions that offer a sliding scale of percentage discounts as more performances are bought. Theatre should add a little magic to people?s lives and some of this magic may be lost if patrons have to reach for pen and paper to book their tickets!

The bronze membership scheme also requires little administration compared with its predecessor. Although most box office software systems include programmes that allow packages to be sold in one go, these sometimes create more problems than they solve. Apart from the extra set-up time required, subscription programmes can often deal only with tickets sold as subscriptions. If customers require extra tickets for a few of the performances over and above their subscription, then these have to be tagged on separately. Ticket exchange is also a problem and nobody likes telling customers who come twenty times a year that they can?t exchange their tickets. It is also very simple to include minority groups in the bronze membership scheme. Sometimes subscriptions can seem unattractive to minority groups because any existing discount may not be built into the scheme. With a bronze membership, the benefits themselves don?t change, just the initial fee. Senior citizens, for example, pay half as much to join (£17.50) and then receive the same discounts as other members. Figures suggest that it is around eight times more difficult to attract a new customer than it is to keep an existing one: we would all do well to remember this.