2001 marked the sixth year of the Northamptonshire Open Studios and Exhibitions (NOS&E) event, writes Paula Armstrong.
This was the largest visual arts event in Northamptonshire, showing the breadth of talent the county contains as well as acting as a springboard for developing arts projects. It was also the first year for the new committee and as part of a team of three, it was a year of fast learning and quick thinking for me. 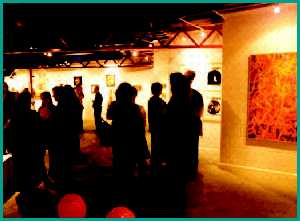 Each year the event has expanded and, thanks to an inherited Regional Arts Lottery Programme (RALP) grant, 2001 was no exception. The event is funded through a combination of artist and advertisers? fees, local and county council grants and the Lottery grant. The inherited RALP funds were used to extend the event, taking it from nine to sixteen days running over two weeks and three weekends. This allowed the participating artists more flexibility in their individual opening days and times as well as more scope for promotion during the event. These funds also gave us the opportunity to extend the print run in order to expand the distribution of the brochure to include hotels, shops, restaurants, garages, heritage sites, schools and libraries around the county. They also created the opportunity for the staging of a selected exhibition of NOS&E participating artists? work at the Roadmender Gallery, Northampton?s premier contemporary arts venue. This ?sampler? style exhibition proved a great success, serving not only as a place for visitors to get an idea of the variety of work included in the event and choose the studios they would like to visit, but also as a central location from which to launch NOS&E 2001 in style. The evening launch provided a wonderful social occasion and an opportunity for artists to network both with other artists and visitors.

Advertising and promotion was a high priority for us as we felt audience development was key. Having a limited budget we sent press releases with images to county newspapers, magazines, radio stations and television. Local papers ran several articles each and included art trails for visitors to follow around their region, while the Northampton paper also ran a centre page spread including interviews with several participating artists. On the local radio we had several mentions and interviews with artists, and the local TV news ?Closer to Home? segment ran a piece including shots of exhibited work and a short interview. We also had articles in ?Artyfacts? the local arts newsletter, ?Emanations? the East Midlands Arts newsletter, and ?What?s On? magazine as well as listings in ?Country Living?, ?Ceramic Review? and, our only paid for advertising, a listing in [a-n] magazine. We hope next year to set a more substantial budget for advertising in order to allow us to expand and include ?paid for? ads as well as roadside signs and banners.

In order to increase awareness prior to the event, 2002 will see smaller, unselected ?taster? exhibitions in libraries and other easily accessible venues in each region during August, the month before NOS&E. We are also establishing a friends scheme to both raise funds and work on audience development. This is also a method of recognising audience loyalty which is considerable.

Further promotion took the form of minibus tours organised for arts officers, gallery owners and curators, arts buyers and so on visiting a selection of studios to get a feel for the event and encourage future visits. We hope to increase the tours next year to A growing event include a tour for potential business sponsors as well as organised day trips for visitors from the county and beyond. We have forged links with our tourism development officer to more fully take advantage of the opportunities afforded by tourism. With a heritage weekend taking place on the middle weekend of NOS&E, we hope to have a degree of co-operation between the events, perhaps having work on display in more heritage sites or providing a weekend break which would include day trips for both events. It is still early days but we have great hopes for the future and are looking forward to next year.