Live art springs from a truly democratic wish to involve everyone in the creative moment, writes Francis Alexander. 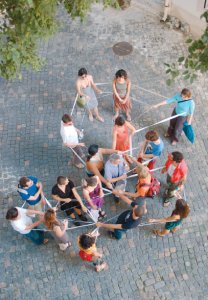 Standing in the shadow of the World’s End Estate on the Kings Road, Chelsea Theatre is London’s Theatre for Live Art, performance, experimental practice – however you want to define it. I made the artistic shift from new writing into live art four years ago and since then, simply in audience terms, the numbers have nearly trebled, as well as growing noticeably younger. Our core funders, primarily our local Town Hall, have noted this and applauded. We’re very much dedicated to the provision of arts resources for our local community, in a part of Chelsea that isn’t totally glamorous, exclusively wealthy or always stylish.

As arts professionals we’re all aware that our very survival depends on audience development. And this is, of course, indisputably a good thing. Traditionally, too many people have been excluded from our theatres our galleries and our concert halls.
Chelsea’s new season of live art, SACRED, extends from my drive to enable what happens when artists get together in the same room with non-artists, allowing people to engage with and take part in top quality international performance.

What unites all of the artists in our forthcoming season is the theme of participation in their processes, practices or products. Lois Weaver, in the guise of uber-glam Tammy Whynot, is delving into those taboo subjects of age and sex, and consulting sexual health doctors and clinical psychologists. She’s holding workshops in Blackfriars and Hackney, conducting clandestine operations in the ladies’ rooms in Selfridges, investigating tearooms, infiltrating tea dances, taking out personal ads and even joining Facebook. Through interviews and research Marcella Puppini – of the internationally acclaimed Puppini Sisters – has gathered together stories of the Kings Road and the people who walk, shop, eat, drink and live there. For behind the rise and fall of the world’s most fashionable road, there stand ordinary people with stories more interesting than anything spilling out of a black cab.

Guided around the backstreets of World’s End (inside a large expanding circle of elastic) by Gustavo Ciriaco and Andrea Sonnberger, I’m made startlingly aware of both an extraordinary piece of choreography and that I’m taking part in a kind of living sculpture, witnessing the urban landscape in a completely invigorating way. Whether you accept Dries Verhoeven’s invitation for a drink inside his Portakabin parked on our forecourt, Rajni Shah’s for tea in our foyer, attend Julia Bardsley’s ‘Almost The Same’ or see Miss High Leg Kick’s come hither for a fashion show inside Dr Robert’s Magic Routemaster Bus, none of these shows would be the same without you. And it’s this belief in the value of participatory work that I think live artists are more aware of than anyone. There’s a strong and growing movement within live art that gives increasing voice not just to the democracy behind this tradition but the direct and uncompromising way that it reflects the world and the societies we live in.

I don’t want, by the way, want to suggest that live art is better than more naturalistic forms of conventional theatre. These forms of theatre have been influential on strands of live art and live art has been enormously influential on forms of conventional theatre. It’s not new, and it’s all around us, and the chances are that you have already seen, loved and hated it – whether you saw the Sultan’s Elephant, Shunt at the National or Punchdrunk at BAC.

What unites the artists commissioned by Chelsea Theatre to make work for SACRED is both the way in which work is made with the non-artist at their heart, and the communication of difference in a world that conceives of humanity in terms of similarity, sameness and demographic outlines. And this is what makes live art so contemporary, challenging and important.

And as far as funding goes, live art is at the mercy of the same cuts, applications and hard realities as the rest of the arts. There is considerable and strategic support provided by the Live Art Development Agency in the form of regularly programmed events, online resources, showcases and artist surgeries, in addition to the similarly experienced and vital services of the New Work Network. ArtsAdmin has for over 25 years successfully championed the cause of innovation and radicalism within live art. Set against a background of controversial Arts Council England reviews, charitable trusts with a strong history of support in this area include the Gulbenkian, Esmée Fairbairn, Wellcome Foundation and the Felix Trust. Our own borough, Kensington and Chelsea, has an arts service which has a particular commitment to Live Art. And we still have yet to hear if last year’s cuts in Grants for the Arts – which is as crucial to us as to the rest of the arts world – will be restored. A cynic might say that the recent Treasury Settlement simply diverted attention from a serious blow to the arts to pay for the Olympics. Incidentally, Richard Dedominici, one of the artists in SACRED, makes this point more articulately than I ever could in his forthcoming live art piece, an unflinching look at the arts and transport policy, Culturail.

In the 1960s our bit of Kings Road witnessed the birth of the mini skirt, and over a decade later our doorstep cradled punk style. These days we have significant communities of refugees, elderly people and people living below the minimum wage, almost on our doorstep. It’s still Chelsea, but not the Chelsea you might know from the Flower Show. And yet it still somehow manages to give birth to Magic.