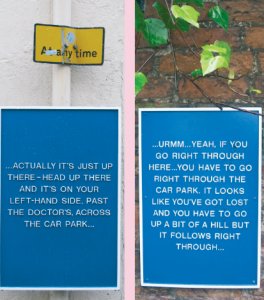 When you think of community-led public art, what springs to mind? Pit wheels, murals or mosaics? A recent project undertaken by Gatherums and Springside Community Group in Louth, Lincolnshire, shows that with the right support community groups can deliver both high quality and contemporary public art projects.

The Gatherums is a small and somewhat forgotten green space in the heart of Louth, whose regeneration has been driven by a dedicated voluntary organisation comprising local residents. A national callout was made for artists’ proposals to draw attention to this spot. The group supported by Groundwork East Midlands Creative Regeneration Programme and East Lindsey District Council-appointed artist Rupert Clamp because of the wit, humour and subtle nature of his proposal.

‘Lost in Louth’ comprises a series of plaques located around the town, signposting the way to the Gatherums in a lively and inventive way. Clamp researched the project by spending time anonymously in the town, stopping people in the street and asking them for directions to the Gatherums. He took care to capture their exact turn of phrase, delighting in the use of dialect and local lore he found. Each of the resulting artworks is a visual pun that references traditional heritage ‘blue signs’, with a direct quote from one of these conversations. They have been installed around Louth: hung from buildings, attached to walls, becoming part of the fabric of the area.

Commissioning public art was a new area of activity for the group, and it is to their credit that they were brave enough to commission a conceptual artist when it would have been easier and less controversial to commission a more ‘decorative’ artist. The project was not without its challenges – none more so than the battle that was required simply to gain planning permission. A small but vociferous local lobby attempted to block the project. In a planning meeting that normally deals with questions such as where to site a mobile telephone mast, councillors debated the question: “What is art?” This was a theme that continued throughout the project. A war of words was played out in the local media, with arguments on whether this project was art and why wasn’t the money being spent on more pressing local issues such as flood defence. To anyone who has undertaken public arts projects, this must sound painfully familiar.

Lucy Lumb was appointed by Groundwork East Midlands as project manager to work with the group. The ENHANCE grant was used as a lever to secure additional funding from other sources, including Arts Council England and Awards for All, to fund a participatory programme featuring temporary interventions, art walks and treasure trails, a launch and creative evaluation. Community photography training, led by Lincoln-based and nationally acclaimed photographer Toby Smith, documented the project.

Mark Jackson, a local resident who participated in a number of the Lost in Louth workshops, commented on how local people benefited from the commission, “The artist has come from outside our community and engaged with it through asking questions and collecting anecdotal history. His work challenges us to do the same. These plaques, by sharing local people’s directions without giving a destination, will encourage local people to stop, read, think, laugh and explore their town anew.”

So what has the project achieved? The artwork has undoubtedly contributed to the distinctiveness of Louth, increased the use of the space and enhanced cultural tourism. The members of the community group have had the opportunity to engage creatively with the work whilst raising the profile of their area.

What has been extraordinary, however, has been the level of local debate this project has created through column inches, local radio and televison. Anthony Gormley has recently, quite rightly in my opinion, bemoaned the low quality of public art. What I hope this project shows is that with considered funding and artistic and project management support it is possible for a community group to commission, quality, contemporary public art that has both enhances and draws attention to their community.

In a recent local radio interview serious concerns were raised that these artworks might leave people mystified. I certainly hope they do: how often are we allowed to be mystified? Perhaps that is the very point of the project…?