Sinead MacManus looks at the vexed relationship between business, theatre and innovation and argues for new ways of thinking. 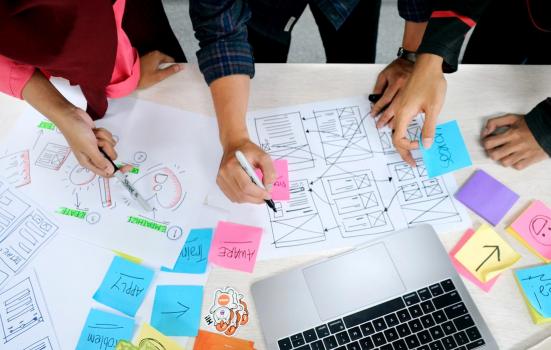 Creativity and innovation in artistic practice is at the heart of what the UK does well, the subsidised theatre sector providing the funding and the space for risk-taking and experimentation. However, the theatre industry can be a strangely un-creative place.

New technology and the ease of international travel have fuelled globalisation; the world is shrinking, and this is impacting on the location of creative industries and consumer cultural choice. New creative centres and economies are developing rapidly around the world, and the UK is competing, not just with the emerging economies of India, China and Brazil, but also with the developed economies of New Zealand, Canada and the Netherlands. We are moving towards a market economy where the consumer is not just king but more like god.

Consumers no longer want to be passive recipients of goods and services but desire an active part in their creation. John Hartley2 in his treatise of the creative industries puts it this way: "The core of culture [is] still creativity, but creativity [is] produced, deployed, consumed and enjoyed quite differently in post-industries societies from the way it used to be ." Gone are the heady days of the newly formed Arts Council of Great Britain, where culture and the theatre were seen as educating forces to be bestowed on the masses. Today, thankfully, we can no longer purport to be the gatekeepers of culture and creativity. In these rapidly changing times, innovation is essential for companies to thrive, not just survive. So, what could it look like in the theatre sector?

Innovation in the theatre industry can be stifled through a funding system that creates organisations dependent on subsidy. The paper Our Creative Potential, by the Dutch Ministry of Economic Affairs and the Ministry of Education, Culture and Science3, makes the point that the entrepreneur and the artist sometimes operate in separate worlds, and that this has led to the "emergence of stereotypical images: as if the 'market' only has a negative effect on cultural quality and as if 'culture' is concerned with subsidy addicts only".

Indeed, the first question I get asked as a trainer and advisor to emerging companies is, "Who will fund my work?" At a time when the arts funding system in the UK is in a state of flux and uncertainty, we need to research and develop new business models for the theatre. Michael Dell revolutionised the personal computing market with his 'build to order' business model and Amazon's Geoff Bezos did the same for bookselling.

In a market where consumers have unlimited choice in terms of entertainment and cultural offerings, who will revolutionise the business model for the theatre? A proactive funding system could designate specific funds for investing in innovation, new ideas and new ways of working in the theatre. Could the Arts Councils, for instance, act more like venture capitalists and invest in projects rather than subsidise them, thus breaking the subsidy-dependent mindset?

From a business point of view, the intrinsic value of much of the theatre is held in the intellectual property of the art that artists and companies produce. Perhaps by investing in artistic products rather than subsidising them, companies would be encouraged to exploit the valuable intellectual property in their artistic works to the full, exploring new markets, and new ways of distribution.

A lack of time, training and resources in many organisations can result in 'blue-sky thinking' being left to a team away-day, only embarked upon once every three years when the business plan is due an upgrade. The creative thinking that real innovation requires needs almost daily attention and strong leadership to put it at the heart of the organisation.

Idea generation, whether by brainstorm meetings, suggestion schemes or good old-fashioned thinking, should be part of the fabric of every theatre organisation. We need time away from the spreadsheets and the phones. We need to set ourselves high targets and goals for innovation. Instead of aiming for 5% growth, why not plan for 15 or 20%? We need to challenge ourselves and set the bar high. As a sector we can be very insular. We need to look outside the theatre industry and see what is happening in areas of business, science and politics, and beyond this, at what is happening at a global level.

Innovation is about people

Innovation is a collective process. An initial new idea may come from an individual, but it is teams that make ideas a reality. The idea of 'hot-groups' and teams plays a big part in innovation in the business world, but this can be a challenge in micro-theatre organisations. A solution could be 'hot-teams' made up of individuals from organisations across the theatre, almost think-tanks of creativity. This would reduce isolation in individual organisations while providing stimulus for creativity. It is said that 90% of new ideas come from outside the workplace. Leaders of theatre organisations should encourage their staff to get out from behind their desks and give them the time and space to be creative, meet people, enjoy culture or take a course.

Google, arguably one of the most creative companies in the world, allows staff work on personal projects for 20% of their time, an approach that has led to the development of groundbreaking products such as Froogle and Google Earth. Truly innovative companies empower their staff to be creative.

The need to fail

Failure is one of the cornerstones of innovation. Tom Kelley from IDEO advises, "Fail often to succeed sooner." We must be able to take risks and look for new ways of working and not be afraid of failing, or even admitting to failure. The more new ideas an organisation tries out, the more that will succeed. However, with many organisations operating with little or no reserves, the financial failure of a project is often not an option. But we must be fearful of success. A successful organisation can be complacent. An innovative company is not happy with today's success, it is looking forward all the time. As such, I will leave the final word to George Bernard Shaw who, in his play Back to Methuselah, wrote, "You see things; and you say, 'Why?' But I dream things that never were; and I say, 'Why not?'"

Sinead MacManus is Continuing Professional Development Leader at University of Greenwich working on the Upstart business support and training programme for creative businesses. She is also a freelance arts consultant and trainer.
e: upstart@gre.ac.uk
w: http://www.gre.ac.uk/upstar