Taking up Touring - Hitting the road 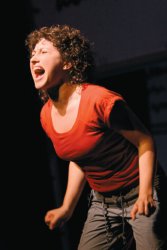 When theatres take the decision to tour their work, a different set of skills come in to play. Stephanie Sirr explains the issues involved in taking up touring.

For our sins, Nottingham Playhouse Theatre Company has taken to the road frequently in recent years. In addition, our theatre in education company, Roundabout, takes in 600 venues per year and we aim to expand the small scale and rural touring wing considerably. Last year we reached around 80,000 people on the road; this year that figure should be closer to 250,000. So why do we do it? Well, for several reasons really.

First, as a producing theatre an enormous amount of creative and financial energy goes into creating each show. On arrival at the Playhouse in 2001, my first concern was how little chance there was to exploit that investment. A fantastic show would find itself in a skip after three weeks. There was never a chance to exploit work thoroughly as Nottingham alone can only sustain runs of four weeks at most.

The UK is very different from its European partners. Many, if not most, producing theatres in Europe have a resident company and the means to revive their major hits. They keep shows in repertoire for years at a time, amortising the costs of creating and artistically developing them with each outing.

The UK has only two theatres that run anything close to a company system and even then it is not the job for life that some of our European partners offer. This means that productions are viewed as ephemeral once theyre gone, theyre gone. With each production costing close to £100,000 to mount, ephemeral is expensive. There isnt even any national system for set storage and at £100 a week or more that soon adds up.

Having arrived at Nottingham Playhouse from Blackpool Grand, a 1,200-seat receiving theatre, I was only too aware that there was an increasing shortage of high-quality touring work available. The number of producers has dwindled dramatically in recent years touring is expensive, risky and time consuming. Its also far from a level playing field and funding for touring through Arts Council England is even more complicated to access now than it was in 2001.

Nobody I spoke to for this article seems really sure whether there is a quota for touring productions per year subsidised through Grants for the Arts issued from the regional offices: hopefully there is or, in principle, a situation could arise where there is total reliance on commercial tours.

At the same time, the number of touring weeks to fill has grown with the creation of new touring theatres. However, their ability to take risks has dwindled with the massive increases in overheads that theatres now have to cover. It seemed then and still seems now madness to Nottingham Playhouse that there was not a national policy of exploiting the work of producing theatres, nor any formal interface with the receiving houses, in order to potentially satisfy both agendas.

Certain producing theatres are encouraged to tour all the time, but most arent and dont. Of course, there are excellent touring companies who are subsidised and might argue that they dont want the market flooded with work. However, as we know that good drama builds an audience for good drama, I dont subscribe to that argument.

Here in Nottingham there are almost 3,000 seats available for drama across the City every night for much of the year. Its a good supply that creates a high demand. If you removed the theatre altogether those people would simply do something else entirely. They wouldnt wait at home for the next drama to come over the hill. They need and deserve good touring drama to keep them theatre lovers.

Easier said than done, of course. Touring is risky. Its physical requirements set-wise in particular have a major impact on design and delivery. It can be costly and difficult to promote. One of our most successful productions in Nottingham went on tour this past spring and attracted one man and a dog audiences, so wed be the last to say that touring is an automatic option. The work has to have broad appeal.

What is odd is how unusual it is to find producing theatres touring their own work. Most people are horrified when they learn were touring our work ourselves (although this role is not always the same: like most theatres, the arrangements we make with partners vary enormously from project to project). Its as if the ability to take a risk is somehow sacrosanct to the commercial sector. In fact, everybody commercial, subsidised and everything in between has to face a degree of risk in order to achieve work worth seeing.

One theatre manager demanded a breakdown of my costs when I had already quoted a fantastic price for a two-hander for one week. I gently pointed out that there was a technical team, I presumed hed like some print, perhaps some lights on stage would look good, there was the small matter of haulage, holiday pay and NI for all, we pay Equity agreed subsidised touring rates (MRSL1), someone really should launder and repair the costumes& and so on. I think our margin was £1,000 not much protection against the unexpected and certainly no amortisation of set-up costs.

This is a national issue lovely shiny new theatres (and many less shiny but no less lovely) with a feast or famine situation product-wise. This year there has been a glut of really high-quality touring work for young people following a shortage previously. If were going to maintain all those theatres, many owned or operated by increasingly cash-strapped local authorities, then a clever solution needs to be found, rather quickly.

Some local authorities have snuck in a policy of not programming new writing as if new writing per se doesnt attract an audience. Which is like painting yourself into a smaller and smaller corner. People do like drama, and they do like new drama when there is something to hang it on paid attendances are up an incredible 39% at Big Ten Producing Theatres since Theatre Review money came on stream. But producers need to be enabled to tour, and venues need to be enabled to book that work. Theatre is a habit that needs to be nurtured across the country, not only where you have a major producing theatre or live within easy access of the West End.

And on the other side of the coin, I know that there are a handful of visionary commercial (they would laugh at this term knowing their bank balances) producers who are almost single-handedly keeping interesting work available in the UK. What happens when these people decide to stop re-mortgaging their homes to support their vision?

We have the greatest theatre in the world its surely time we created a new, robust framework through which everybody can access it. And stopped chucking some of our finest new productions into a skip.