All capital projects can encounter problems beyond the control of the arts organisation. Hamish Glen explains how the Belgrade Theatre in Coventry handled an unexpected delay in reopening.
Redeveloping, refurbishing and extending venues is something thats happening up and down the country, and while every such capital project has a different reason for being, most will have two things in common. First, whilst you can try and plan for every circumstance you can think of, the reality of a capital development project is that you never really know whats going to happen until youre in the thick of it. And, second, how do you keep an inactive arts venue active and in the minds of the audience?

The initial phase of our own £12m project which will refurbish our main auditorium, build a new studio space and improve facilities throughout the building started on site in the summer of 2004, and is currently in the middle of its second phase, due for completion in 2007. Both of these phases have involved substantial periods of closure, which in itself has created challenges quite apart from the relentless problems of the budget and programme delays of the development itself.

Our ambition was always to keep these closure periods as short as possible to help us retain our audiences on re-opening as people do lose the habit, or move elsewhere for their theatre. Weve made a considerable effort to maintain the theatres visibility in the city by increasing our community arts activity working with communities and partners to mount productions in other venues around the city. This has been a successful way of keeping the work of the theatre in the public eye.

Unfortunately, the unpredictable nature of this type of project reared its head a few weeks ago when we had to announce the cancellation of our annual pantomime due to delays in the building programme, which was a huge disappointment to all of us. Quite apart from the schools and audiences that had already spent over £40,000 on tickets, we had commitments to staff who had been expecting to return to their jobs and to re-open the theatre to the public. It also had the potential to be a major PR disaster, despite the fact that the decision was forced on us.

We decided that in line with our newly acquired brand values the best way to handle it was to be very open and honest about the situation, so we held a full staff meeting, made personal calls to all of those that had already booked, and simultaneously released the announcement to the press all on the same day. This approach seems to have been appreciated, as although there was great deal of disappointment, we managed to avoid anger from audiences and staff as well as damaging stories in the press which just left us with the small task of dealing, financially, artistically and operationally, with a now extended closure period.

Financially, the answer had already been put in place during the planning process as we were very much aware that capital projects can find themselves taking longer than initially predicted. Wed already decided to wait until the last possible minute to recruit the staff needed to re-open the building to the public and to mount a large scale pantomime; these savings on staff wages counterbalanced the loss of box office and ancillary income.

Artistically speaking, my in-house programme of work had been carefully planned and the visiting work had been pencilled in (although we had been careful not to enter any contractual agreements) so the delay was hugely disappointing particularly with regard to our home-produced work. This is not only because itll now be even longer before I get back into a rehearsal room, but also because the carefully crafted, and somewhat precarious, array of talented people with whom I want to create this exciting new artistic vision now has to be completely reshuffled, which Im sure will create yet more headaches.

Operationally, we are blessed with an exceptionally able and positive staff team, but even so, the delay has had a demoralising effect on them particularly those who wondered what they were supposed to do for all this extra time when they would have been building, selling and running shows. 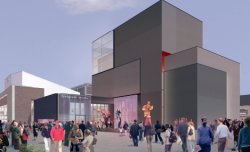 Whilst a closure period is often the downside of any capital project, the upside is that it offers a rare opportunity for an organisation to take a long hard look at itself and revaluate what it is for, how it does what it does and how it might communicate these things more clearly. Its also a breathing space to offer more extensive training to staff members and, in our case, to build a clear and uniform understanding of what we want to do and why we want to do it, in preparation for the excitement of opening a fully refurbished theatre, a new second space, and the delivery of a far broader range of work than before.

Any capital project will throw up significant issues and problems, and it is sometimes difficult not to get drawn into focusing on the negatives of a project. The best advice I could give to anyone involved in, or thinking about embarking on, a capital development project is to stay focused on the end result and on what that wonderful, revitalised venue will do for the people of your town or city.

Hamish Glen is Artistic Director and Chief Executive of the Belgrade Theatre, Coventry.
t: 024 7625 6431;
e: admin@belgrade.co.uk
The theatre is scheduled to re-open in 2007.