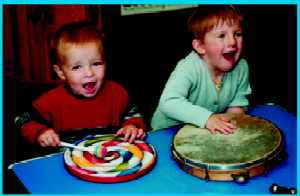 Since Zoltan Kodaly (1882?1967), a Hungarian composer, folk music collector, and music educator, stated that music education should begin at conception, there has been a great deal of interest in the effects of music on a child?s development. Music is processed in several parts of the brain and body, making it one of the most complex experiences the brain encounters. Many scientists believe that certain types of music stimulate a baby?s brain, building synaptic pathways that will aid their intellectual, physical, and social development, giving them a definite advantage in life.

Several of the fifty-eight projects that received Youth Music?s First Steps funding are working with expectant parents and new-born babies to enhance parent?child relationships and to assess the impact of music on the very young.

In an antenatal workshop run by Healing Arts on the Isle of Wight, parents are encouraged to sing a song, preferably one their parents or grandparents sang to them, while their child is still in the womb, as an effective way of soothing their babies. Other parents-to-be in Kent are learning to relax with their unborn child while singing and moving to songs with a strong rhythm at Kindermusic, Kent Music School.

The impact of these projects on babies? development is still being assessed. However, later in life the children who have taken part are expected to be emotionally well balanced, have a higher than standard IQ, and, as an added bonus, some may show a better than average ability at music. For very young children with few language skills, or children from a multi-lingual household who are not as proficient in English as their mother tongue, music can also help their basic language development.

At the Thomas Coram Early Excellence Centre in London, pre-school children communicate and interact through music. Using their voices and bodies as an instrument helps them to develop co-ordination and self-expression as well as encouraging spatial awareness through movement. The activities release physical or nervous energy, resulting in the children being more focused after their music session.

Christina Coker, Chief Executive of Youth Music, says: ?From research and experience, we know that children seem to really enjoy reacting spontaneously in their music lessons. They also learn how to take turns and to work in a team, which helps build their confidence, social skills and learning ability.?

Another project, Art in the Park in London is helping multicultural two to four year olds with speech difficulties become more communicative. The ?Where Do We Begin? creative music mornings give them a chance to work with their parents under the supervision of a music-maker. This face-to-face learning is essential in the development of language which when combined with an assorted range of music makes learning words more accessible and fun. The use of music and songs from diverse cultures widens the children?s experience of music and expands their understanding and tolerance of other cultures ? a target for pre-schoolers set by the government?s Early Learning Goals (Foundation Stage) in September 2000.

A key part of Youth Music?s mission is to propagate access to music by showing those involved in the projects how to teach others. The Music Man, held at Teignmouth Pre-school, Devon, helps youngsters create their own songs and respond to music creatively. Once a month teachers and parents can attend a session where they discover ways to include material from the music lessons into the classroom and home.

Christina Coker continues, ?In a society that increasingly uses passive activities like watching TV to pacify its youngest generation, it is rewarding for Youth Music to fund music projects that activate the senses and minds of the next generation. Who knows what their future may hold??