Will the eleven ever become one? Liz Hill asked Peter Hewitt about the case for integrating the Regional Arts Boards into a new-look Arts Council of England. 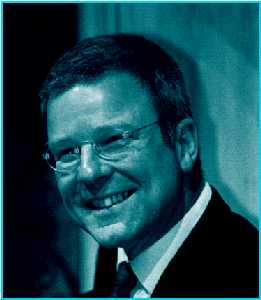 You may or may not agree with his views, but I defy anyone, in conversation with Peter Hewitt about his vision for the future of arts funding in the UK, to find him anything other than straightforward, honest, determined, persuasive and robust: the two-tier funding structure must end to make access to arts funding and support easier for those who need it.

A man who lists the two most influential people in his career as a certain Mr Snodgrass, a secondary school teacher of literature, and community arts pioneer Ed Berman, Hewitt is clearly someone who favours clarity over complexity. He sees a simple unified funding structure as an essential step in achieving transparency and accessibility in arts funding decisions, and permitting big ideas to be aired and developed. "In a structure with eleven separate organisations, you have less capacity to respond to exciting, bold ideas, wherever they come from in the country, because efforts are fragmented. The Arts Council has to have the capacity to respond to innovation, experimentation, and artists' energies. In my opinion, neither the individual RABs nor the Arts Council has enough capacity to do this at present."

Waste not want not

He also has a clear distaste for waste, and is convinced that the nature of the relationship between ACE and the RABs is wasteful not just in terms of resources, but also in terms of wasted opportunity for making a strong and unified case for the importance, value and impact of the arts: "Evidence shows that a two-tier system inevitably results in some waste of energies through frictions and negotiations between one tier and the other.That's not a responsible way of acting; what we want is debate and dialogue, but the focus of our efforts must be on supporting artists and the arts community. We want to create an organisation where debate about national and regional issues in the arts are no longer polarised in the way they are at present. If you have a single organisation, with regional people in the centre participating in national decisions and bringing their regional perspectives to those decisions, you can avoid much of that polarisation.

"Last year we raised £100m of new money for the arts.The Arts Council did that, by and large, on its own. But the case would have been much stronger - and needs to be much stronger in the future - if we can speak as one, nationally and regionally. Another outcome of a restructuring - and it is not a driver, but a benefit that comes out of what we're doing - is that we can achieve more at less cost, with fewer people. The savings that we can achieve can be returned to artists and the arts community. It is incumbent on an organisation like ours to ensure at all times that we do all we can to make sure that the vast majority of our resources get into the hands of the community that we serve."

Misconceptions about ACE's vision and motivations for an overhaul of the funding system have, he believes, been undermining such arguments. The reasons for pressing for change, he says, are absolutely not, as some commentators suggest, an attempt to grab power at the centre and strip the regions of their autonomy and newly devolved authority: "What we are trying to achieve is the development of an organisation which can speak more coherently, and make the case for the arts more effectively than at present. In our prospectus we referred to this as 'one voice', and some people have characterised this as a 'Big Brother' approach. It simply isn't that at all. Diversity is the very energy of what we're doing. The Heads of the Regional Offices will have a key place at the very centre of the new organisation - not as people who are invited in as outsiders, but as insiders, around the senior management table. By bringing their huge regional knowledge and experience to that table, they can ensure that the new Arts Council is much more regionally aware and informed than the present Arts Council ever can be. They will affect how the Arts Council behaves and the policies it adopts."

So if the vision of ACE at the hub of a network of strong regional arts offices is such a positive one, why the cloak and dagger tactics and sudden announcement of what now appears in the regions to look more like a hostile take-over bid than a strategic move offering benefits to all? Prior consultation would surely have paved a smoother path for the now somewhat beleaguered Chief Executive, locked into an all-too-public battle to bring ten RABs, ranging from the suspicious to the downright hostile, onto his side: "Having looked at how the eleven funding organisations work with the arts community, Council is quite clear that it wants to move to a single organisation structure - far better to be up front and honest about that than to set in motion some kind of tokenistic so-called consultation process when its objective is already clear. Having said that, Council is positively welcoming contributions, proposals, thoughts and ideas about how exactly we make one organisation work best. We don't have a blue-print.We really do want now to discuss with our partners in the arts community, local government and elsewhere, how this organisation can work. We want to take the very best things from the present structures and make sure they are protected and built upon, rather than dismantling the good work that is being done at ACE and the RABs at the present time. We're very open and attentive to proposals.

"Another reason why we didn't come out with perhaps a more open and discursive approach, is that frankly, we thought progress would be more purposeful if we put forward a concrete proposal. I've experienced far too many instances within the arts funding system in the past 20 years of lengthy debate and discursive consideration of topics which never leads anywhere, so we thought it best to put something tangible on the table."

Why is change in the air again now, rather than in 1999 when funding power was devolved to the regions? According to Hewitt, it was an issue of credibility. "If, when Gerry Robinson was appointed to Council and I was appointed Chief Executive, we had come in and said we wanted to create a single organisation, people would have quite rightly said that there was insufficient evidence of the Arts Council's commitment to the regions at that stage. But over the last 3 years, the Arts Council has delegated very substantial sums to the regions - a major plank of our policy. Only when we had done that, was it possible to contemplate moving to a single organisation structure. We needed that evidence of commitment to the regions before we did it.

"The creation of a single organisation is absolutely not a reversal of what has happened to date. It's a continuum from what has gone before.There's no question of centralisation. The same people who were responsible for putting in place the process of delegation, the same Council, same Chairman, same Chief Executive, the same leadership is making the proposal that is under discussion - all committed to as much if not more decision-making and funding taking place at regional level."

With so much energy being expended in the restructuring process, it's easy to forget that other funding matters continue apace. What of the outcome of the Theatre Review, and the pressures now building on theatres across the country to deliver results with their new-found £25m? And the Lottery Capital programme, for so long the hottest topic for dark mutterings and disillusionment amongst disappointed applicants? Clearly Hewitt has a lot on his plate, but this does not faze the man at the heart of what probably amounts to the boldest shake-up of the arts funding system in living memory. He is a man with a mission, who when asked what job he would do, if he could do anything he chose, is embarrassed to admit that he would choose the job he is in now.