The city must address a “cultural deficit” among its youth, consultation finds, as it eyes a bid for UK City of Culture 2029.

The pilot programme will “challenge accepted barriers” in one of the sector’s least inclusive professions.

Three marble and bronze scupltures of Caribbean produce have become the first public artwork in the UK celebrating the Windrush generation.

Veronica Ryan's work references narratives of migration and movement, drawing on her childhood memories of east London's Ridley Road Market, near where the statues are sited.

"I like the fact that the community in Hackney will see some familiar fruit and vegetables represented in the sculptures, and always enjoy these connections."

The sculptures are part of Hackney Council's 'Black History in the Making', funded by the Freelands Foundation, which will continue throughout autumn 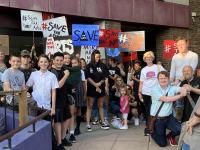 The council decided in 2017 to outsource its next cultural strategy. Cabinet Minister for Culture Callum Procter said “it’s now time update our work and build on the firm foundations now in place”.

The area has recently benefited from funding through the Cultural Development Fund, Heritage Action Zone and Towns Fund, alongside support for cultural programmes Grimsby Creates and Cleethorpes Townscape Heritage Programme.

Beam consultant Frances Smith said the strategy will “build on achievements to date and explore how the power of creativity can help residents and visitors to shape North East Lincolnshire’s distinct sense of place.”

It will focus on three key elements: how to build leadership, how to engage young people and how to celebrate the area's heritage.

Birmingham 2022 has released details of the six-month festival set to run across the West Midlands as part of the Commonwealth Games.

The £12m festival will showcase art, photography, dance, theatre and digital commissions between March and October next year.

It will open with a new production, Wondrous Stories, performed by Leamington Spa-based dance circus company Motionhouse. The festival's full programme is set to be released in January,

Birmingham Council's Creative City Grants will support the festival by offering 150 community groups grants of up to £20,000 to deliver creative projects that “impact positively on their community”.

A 'Town of Culture' competition could be heading to West Yorkshire as early as 2023 under the area's economic recovery plan.

The plan proposes "a creative new deal" to promote places in West Yorkshire and boost the visitor economy.

West Yorkshire Mayor Tracy Brabin revealed plans to create a new cultural event for the region when she was elected in May.

The former Shadow Culture Secretary penned the idea as a way of supporting the area's cultural offer.

If the contest is launched, it would be reserved for places too small to vie for the national City of Culture title.

West Yorkshire is represented by Bradford and Wakefield in the 2025 longlist for UK City of Culture 2025.

A 'partnership gallery' at Shrewsbury Museum & Art Gallery will open in 2024, the British Museum has announced.

The museum's Bronze Age displays will be "redeveloped" to make better use of gallery space and create narratives about historical local life.

Three 12,800-year-old woolly mammoth skeletons - the most complete sets in northwest Europe - will be the draw card of the gallery.

Sheffield receives less arts funding than Manchester despite having a larger population.

Analysis by The Star found that Manchester and Leeds get four times as much from Arts Council England.

Leeds received the equivalent of £166.94 per person over the same period, while Manchester got £274.78 per head of population.

The Sheffield Culture Collective launched its first strategy for regional growth in June.

"We are keen to strengthen relationships with major funders to redress the geographical imbalance in funding... and are working with partners in the Culture Collective to do just that," Grocutt said.

"We now need to make a determined effort together to bring in greater investment in to Sheffield and tackle this unfairness."

Crewe Lyceum has reopened as it celebrates its 110th birthday.

It enjoyed a busy reopening last weekend, welcoming visitors for the first time in 17 months: "It reflects just how much the theatre is valued in the hearts of the local community."

A 12-month programme of projects and events will commemorate the theatre's heritage, beginning with five new shows this season.

Director Adam Knight said he grew up watching performances at the Lyceum and is proud to continue that legacy.

"Our re-opening and 110th birthday are the perfect opportunity to celebrate the stories and successes that place our theatre at the very heart of our community."

The UK's creative and cultural industries generated £150.4bn in 2019, according to new data.

DCMS figures show the industries' value grew by 8.3% in the year from 2018, adding £11.5bn to the economy before the pandemic hit.

While the creative industries' value continues to dwarf the cultural sector's at £155.8bn, cultural businesses generated nearly £36bn in 2019 - more than gambling and sport combined (£8.3bn and £16.9bn respectively).

Among all DCMS sectors, culture drew the largest proportion of its value from London. Activity in the capital added £2.2bn more to the economy in 2019 - a 10% rate of growth.

The sector's gross value added grew by 6% in all other regions except the West Midlands, where it fell by about £1m.

Swansea Council says the pandemic changed its plans to enter the UK City of Culture 2025 contest.

The city bid for the title in the first three years of the competition and was shortlisted for the 2017 and 2021 years.

Council Leader Rob Stewart said: “Our current efforts are firmly focused on helping Swansea and its cultural community lead Wales out of the pandemic”.

Stewart added it is likely it will consider a bid in future years.

Wales is represented on the 2025 longlist by Newport, Powys, Conwy County, Bangor and Northwest Wales.

Places that have fewer National Portfolio Organisations and less buy-in from local authorities may struggle to access other funding streams, new research indicates.

Adding a seventh city to the longlist of bidders who will receive funding would allow more places to "complete their journey," an expert on the competition says.

New modelling from Oxford Economics says the country's creative sectors can more than recover from the loss of 100,000 jobs with the right investment.