Culture Secretary Nadine Dorries tells MPs that while the system of distributing arts funding is "not perfect", there are no plans to abolish Arts Council England. 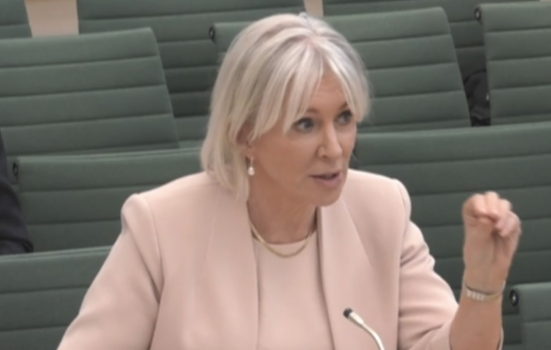 There are no plans to get rid of Arts Council England as part of a review of public bodies, Culture Secretary Nadine Dorries has told MPs.

Appearing before the DCMS Select Committee today, Dorries said that while the system for distributing arts and culture funding around England - a function carried out by ACE - is "not perfect", there are no plans to axe the organisation.

Asked whether possible abolition of ACE was on her agenda, she replied: "Absolutely not."

Under plans set out by Minister of State for Brexit Opportunities and Government Efficiency Jacob Rees-Mogg, the Public Bodies Review Programme will require DCMS to review its public bodies.

It will need to assess whether their function should be delivered by the state, or whether an alternative, such as abolition, privatisation, or a merger is "more fitting".

Quizzed by committee member Kevin Brennan on the potential implications for ACE, Dorries said that getting rid of the body would result in a need for more civil servants at the department to carry out its functions - something government is keen to avoid.

"If there were a proposal to abolish the arm's-length body that distributes [arts] funding, what we would probably need is an increase in the number of civil servants to do that distribution," Dorries said.

"So I think the argument that we need to reduce the number of civil servants and reduce the arm's length body kind of compete with each other.

"For me what's important is that the money goes out into the areas of the UK where it has never been spent before, outside of the South East and London.

Committee chair Kevin Brennan also quizzed Dorries about ongoing efforts to redistribute arts funding outside of London, expressing concern that some organisations are attempting to "game the system" by registering at postal addresses in parts of the country where they have no roots.

Dorries said she is aware of a London-based organisation in receipt of ACE funding attempting such a thing.

"I have actually spoken to a museum in the far North of England who have been written to by an NPO based in London asking them whether they could register their NPO at the museum's address."

"I am raising this issue at my next meeting with Arts Council England."

As part of a wide-ranging session, Dorries also outlined government progress in relation to efforts to achieve fair payment for songwriters and composers from music streaming, something the committee called for action on in a report published last July.

"As a government we are right behind your recommendations," Dorries said.

Speaking in a debate in the House of Commons yesterday (18 May), DCMS Minister Julia Lopez, who has responsibility for creative industries, said government is progressing with efforts to address the situation and is considering potential changes to legislation.

Lopez said that the Intellectual Property Office is working alongside industry experts to develop solutions to issues around contract transparency and music metadata.

"That will have an impact on the way in which songwriters and composers are remunerated for their work on streaming," she said.

"We have also commissioned independent research on the impact of potential legislative interventions aimed at improving creator remuneration."

The logical outcome of what Dorries seems to be arguing would be a proper decentralisation of funds and responsibility to the appropriate regions... but that would never occur to a Westminster politician. She can only think that 'no ACE would lead automatically to more ignorant and remote civil servants in her department." Funnily enough her fear of the ludicrous Jacob Rees-Mogg almost mirrors his pompous father's London-centric and institutional attitude when he chaired the Arts Council, failing to understand the developmental work being done right across the country and the value of local authority partnerships.
Dorries says, "For me what's important is that the money goes out into the areas of the UK where it has never been spent before, outside of the South East and London". No one would disagree with a case of wider distribution of funding but here is the problem. Arts practitioners and agencies target their work at audiences. At present there is a concentration of both producers and audiences in the areas that Dorries wants to move away from. The current concentration of population is a response to opportunity as reflected by employment, housing and access to services - the result of imbalanced economic development. When was the last time that the government provided a case for investment in the less developed areas of the country? Actually, it did exactly the opposite; it cancelled the HS2 proposed train link, cancelled key projects in the North and invested in 'levelling up" in areas with poor outcomes. Arts funding is a miniscule resource compared to the essential developmental funding that the government has failed to identify.