Recommendations including more public artworks and neighbourhood creative hubs aim to contribute to the City of Culture's legacy. 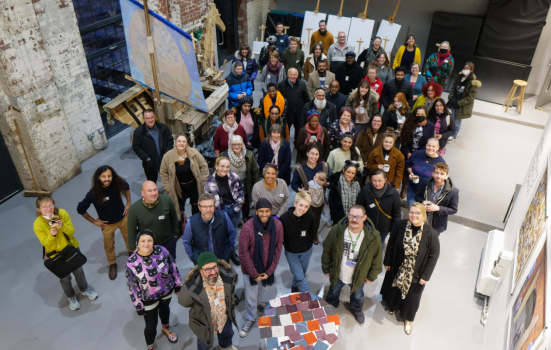 Participants of Coventry's citizens’ assembly on arts and culture
Photo:

Art for the People, the UK’s first citizens' assembly on arts and culture, has put forward its recommendations for Coventry’s cultural future.

The team of 50, proportionately selected to represent the demographic make-up of the city, settled on nine recommendations after each idea received backing from over 80% of assembly members.

Among the suggestions are a free art pass for Coventry residents aged between 15 and 25, a funding pot for local people to deliver cultural events and a network of neighbourhood creative hubs.

Creating art in public spaces such as Coventry’s central ring road also features, while a proposed city-wide scheme, Encounters with Arts and Culture, includes plans to increase the visibility of arts opportunities and introduce a local Artists Advice Bureau.

“Our citizens see a bold vision of Coventry being a pleasant place to live – verdant, green, welcoming and future-facing - and where the arts are fully-integrated into all communities."

Art for the People’s citizens were asked to explore the question: how will arts, culture and creativity shape a better future for Coventry?

The assembly collaborated over six weeks during the project’s learning phase, with members listening to expert witnesses before discussing ideas in break-out rooms, conducted over Zoom.

The deliberation phase took place in person, when nine of the 18 recommendations were taken forward after receiving support above the 80% threshold.

Some recommendations that were close to being accepted have since been worked into the selected ideas with the citizens, Vaughan told ArtsProfessional.

“That allowed us to include some really good ideas that only missed by a whisker.”

Talking Birds will now work towards testing some of the proposals.

A steering group made up of assembly members will help guide future projects. Meanwhile, funding is available for some assembly members to take part in community activator training, to facilitate smaller pockets of local activity.

One of the first plans is to make interventions into schools and careers fairs to promote creative professions.

“We feel this could be done relatively simply but make a potentially big impact,” Vaughan said.

A pop-up arts hub is being trailed at Talking Birds’ studio on Friday (6 May), which the organisation hopes may facilitate the start of a first neighbourhood hub.

“We are going to try and do a little bit on pretty much all [the recommendations] and see how much we can get people pulled together to get behind them and make them happen,” Vaughan said.

Some of Art for the People’s suggestions were absorbed into Coventry Council’s refreshed cultural strategy, created by Culture Change Coventry.

The strategy, which is currently out for consultation, outlines an action plan for the next three years across six key goals: partnership, lifelong learning, diversity, health and wellbeing, economic growth and Coventry’s green future.

Vaughan noted the categories almost mirror the themes assembly members came up with independently during discussions on what areas to focus on.

Vaughan said she “couldn’t recommend [a citizens' assembly] enough” to other areas considering it.

Admitting it’s an expensive process when done properly, Vaughan added a citizens' assembly had offered a wider range of people and a broader set of perspectives than a traditional public call out in the arts, which may only attract creatives.

“The investment citizens put in was massive. They felt a real sense of responsibility for making the right decisions for the city,” she said.

“Residents [are] harnessing arts, culture and creativity to shape a better future for themselves and their city.”

It's great to see the Citizens' Assembly approach taken by Coventry - it's an exciting way of directly engaging the public in the policy-making process. I wish it every success and hope the Council and its partners are able to help deliver the recommendations. However, while I can understand Coventry's eagerness to claim to be the first Citizens' Cultural Assembly in the UK, that title was taken 25 years ago by Fife Council, when its arts delivery team, Arts in Fife, led by Bridget McConnell, undertook exactly the same process for exactly the same objectives. The jury process itself went well, but implementing the recommendations was the challenge, even with a well-disposed Council. Good luck, Coventry!