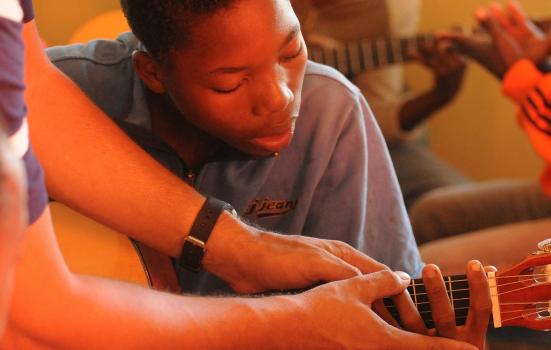 Music educators fear a new model music curriculum won't be effective amid a lack of enforcement and support.

Others have welcomed the curriculum as a major step forward. Arts Council England Chief Executive Darren Henley, who undertook a review of music education in England a decade ago, wrote in a blog that it offers an important framework for provision and progression that music education hubs will support.

The Department for Education (DfE) has committed £79m to extend music education hubs in 2021/22 but teachers say hubs don't have the capacity to support all schools and that dedicated teacher training funding is needed.

"This causes organisations leading hubs to be less easily able to deliver on their original core roles and now there are new quasi-mandatory requirements placed upon them."

The curriculum advocates for at least one hour's classroom music per week from Year 1 to 9 with additional instrumental tuition and ensemble work. Simon Toyne, President of the Music Teachers' Association, said that expectation "could make a substantial difference to the music lives of our children and young people", as well as the country's talent pipeline.

Despite some parts mentioning "mandatory" lessons, Ofsted will not inspect for the curriculum, which is a non-statutory document: "It is designed to help schools rather than be prescriptive," a spokesperson said.

Its National Lead for Music Mark Phillips said the effectiveness of the model music curriculum will depend on the way it is deployed by individual schools.

While there is no pre-requisite for schools to adopt it, "there remains every expectation that schools have in place a music curriculum that is ambitious, well sequenced, implemented well, and which leads to good musical outcomes for all pupils," Phillips said.

DfE says the curriculum is distinct from the National Plan for Music Education that has been on hold since February 2020. Unable to commit to a new date, the department says the plan will be published "in due course".

The curriculum's release was also delayed from summer 2019 after exam board ABRSM, which controversially won a £4500 contract to develop it, had its first version rejected as inadequate.

The eventual document was produced by ABRSM under the guidance of a panel of 15 experts led by Baroness Fleet, Veronica Wadley, who said the year-by-year guidance "reinforces the important role that music plays as part of a broad and balanced curriculum for all children".

Musicians unions have raised concerns the subject will be squeezed out as schools attempt to recover from months of lost learning in key subjects. An ISM survey last year indicated one in ten schools weren't teaching music and Ofsted inspections found they "struggle[d] to work out how to include practical subjects" while operating remotely.

"While there is rightly a focus on academic catch up, it is also important for children and young people [to] experience music, sport and arts for their wider development."

In the foreword to the curriculum, Gibb said the guidelines will be a "benchmark" for teachers, a "roadmap" for students and a way to equip them with the technical skills and creativity to both compose and perform.

But teachers have criticised the document as confusing and badly written. Elizabeth Stafford, Director of Music Education Solutions, said skills have been "introduced" in more than one key stage and there is some confusion between 'dynamics' and 'articulation'.

Martin Emo, a music technologist, sees it as a "model" only, saying its role was to get teachers engaged with a music curriculum again.

A more "rich and diverse" array of musical experiences is needed, the curriculum says.

DfE says pupils will be encouraged to listen to classical music as well as pop, rock and jazz from more contemporary sources.

The curriculum aims to ensure universal provision. From an hour a week in key stages 1 and 2, pupils under the model will also gain a "mandatory" term of instrumental teaching in years 3 and 4.

Dance, singing, listening and composition are all part of the curriculum, which mentions varied forms such as Calypso, Bhangra, Nigerian drumming and choral music.

"It is important to recognise that modern British identity is rich and diverse, resulting in communities which celebrate and explore their own specific, localised ‘cultural capital.'"

It says effective delivery is "likely to come from a combination  of schools, teachers, practitioners, professional ensembles, venues, and other music education hub partners working collaboratively".

"This shared foundation will provide schools with a launchpad to access wider musical culture in which all can thrive and share the joy of music."

I've reached that stage in a working life where you wonder if you are reading a throwback article - you know the kind of thing, on this day 20 years ago ...and here I am again with the 'Model' Music Curriculum. if we have learned one thing in music education policy - no, let me rephrase that! If we have learned one thing in education policy - surely it is that learning is not a function of curriculum. To propose materials for children to explore and experience is of course a perfectly reasonable thing to do - notwithstanding that the materials proposed do seem rather limited, but let's leave that aside for now - but to propose without investing any resources in teacher development in order to support teachers to facilitate learning in and through the proposed materials is Such. A. Waste. Of. Time. And. Energy. Yes, I have now officially joined the ranks of the grumpy old women (and men, no doubt). And whilst I have you - I hold many of the people involved in developing this curriculum in the highest respect. They have done a valiant job in trying to reconcile political, socio-cultural, educational and artistic considerations here. I do think the repertoire is too narrow, too Western classical dominated, and the fundamental musicological model underpinning the whole document is essentially white Western status quo, but the real problem I have is with the whole concept. How about investing in teacher development that supports partnerships in musical learning with young people, creative, developmental, dialogic, critical thinking exploration of the vast universe of music...Okay I'll get back in my box now.