Critics call Festival UK 2022 "nationalistic imperialism" and "a showcase for the Government". The creatives involved say that couldn't be further from the truth. 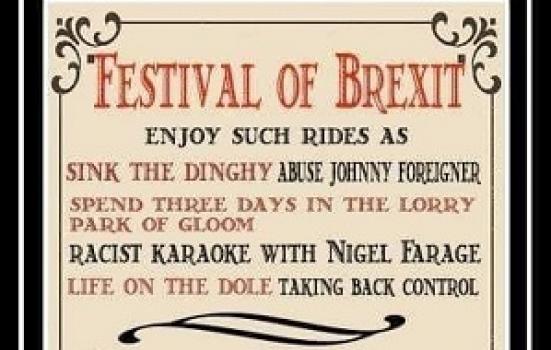 Festival UK 2022 is not a political event or an exercise in nationalism, participants say, amid heightened criticism of the £120m creative showcase.

The 10 teams selected for the project have fielded "hostility" from those who believe the event supports a Conservative Party agenda or is a waste of money when creative industries are under great pressure.

The Festival 2022 managing team says 78% of the online response to last week's teams announcement has been positive or neutral.

However, there is significant dissent. Reaction has been swift and strongly worded. "Artists are signing up to take part in propaganda for the most divisive political event in living memory," one person claimed. Others called it "nationalistic imperialism" and "a showcase for the Government".

On Twitter, a new acronym for Festival UK 2022 has emerged - FUK2022 - and in the absence of an official Facebook page, two satirical ones have given the disillusioned space to compare the event to spectacles produced by China's Communist Party, films by Nazi propogandist Leni Riefenstahl and Cormac McCarthy's post-apocalyptic novel The Road.

Individuals and groups across the cultural sector, including Migrants in Culture and the Movement for Cultural Democracy, say Festival 2022, often referred to as the 'Festival of Brexit', is not the "open, original and optimistic" project it is billed as.

"Bringing people together around as divisive a project as Brexit isn't creative, it's oxymoronic and the political antithesis of the kind of cultural democracy agenda that's urgently needed in the current situation", the Movement for Cultural Democracy tweeted.

On Thursday (April 1), the DCMS Select Committee announced an inquiry into major cultural and sporting events and their role "in celebrating the UK's national identity".

The inquiry will consider "challenges in the road ahead to the Festival UK 2022" among other events like the Commonwealth Games.

Committee Chair Julian Knight said that, "done thoughtfully", the events could reignite parts of the economy and bring the nation together.

"But the scale of these events mean they come at great public expense. With some already facing steep challenges, we’ll be looking at how best to make a positive impact and deliver value for all."

Some of the selected teams expressed sympathy with the anger that people have towards Festival UK 2022.

Dr Nelly Ben Hayoun-Stepanian, of Nelly Ben Studios, tried to calm detractors on Twitter who accused her of selling out: "Yes, Brexit has been and is a collective trauma", she wrote.

She opened up a hotline to connect with her critics: "I think it's clear from the reaction around the festival that this is something that we [the festival teams] will have to be dealing with."

Ben Hayoun-Stepanian said she found it difficult to understand the furore around the teams announcement since "no one in the creative industries voted for Brexit".

"We all know it's not the 'Festival of Brexit'... I wish it had happened under a different Government, but that's democracy."

Liz Pugh, Creative Producer of the Walk the Plank, says people have been "conflating the priorities of the current Government with anxieties about what the festival might represent".

"I think, inevitably, in the absence of a clear name for the festival and the programme deliberately not being announced yet [people] have filled the vacuum with speculation about what the festival might be or not be."

While noting there is perhaps a difference between funding delivered by arm's length bodies like Arts Council England and or directly from DCMS, Pugh said "I see it as our money, not the Government's".

Festival UK 2022's team says all four nations of the UK have agreed the event's content and approach should be "politically neutral" and delivered at arm's length from the Government.

"If you want to characterise it, then it is an exercise in optimism," a statement from the festival said.

"We want to celebrate the diverse talent to be found across the UK and bring people together, with the belief that that creativity can make life better."

Pugh, of the Walk the Plank team, said she shared critics' concerns about the event's optics early on but has been reassured by an exceptional applications process. There has been no pressure to present a particular view of Britain, she added.

A paid R&D process with 30 shortlisted teams allowed them to develop their ideas alongside the STEM sectors. The festival said it "brought a curatorial eye to the selection process... but otherwise our role has been to support and advise, not interfere".

Despite claims of nationalism, the showcase aims to reach 66 million people worldwide and "we have always thought about the festival in global terms".

"Whilst projects will take place at locations across the UK, we were keen to see how they would be able to connect with people wherever they are in the world."

Ben Hayoun-Stepanian, who is of French Algerian background, said plurality is at the core of her work.

My concern is that yet again £120 million will be spent on activities in major cities - London, Birmingham, Manchester, Glasgow - if Scotland isn't independent by then - etc etc. Yet again the residents in small towns will be ignored. Towns with poor and expensive transport systems so people have to go by car, pay for petrol and parking to engage with this - or just get the 'second rate' digital offer that does not stir your soul. Art for the elites and city dweller AGAIN and sod off the rest of you. I challenge you to prove me wrong. I would love to be.