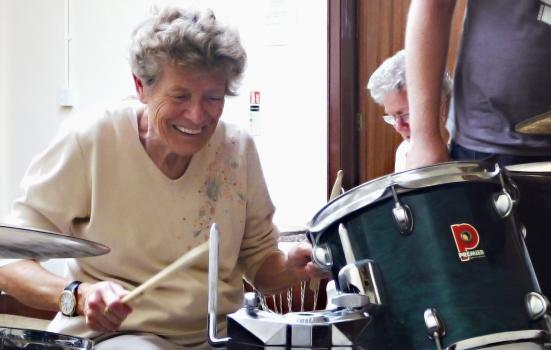 The potential of music to empower and soothe people living with dementia has been outlined in a new report, which calls for increased collaboration between politicians, technology companies, arts organisations and the healthcare sector to make access to the artform easier.

It also finds evidence of a “memory bump”, in that people with dementia retain the clearest memories for music they enjoyed and heard between the ages of 10 and 30.

The report authors use the conclusions to urge music streaming services such as Spotify to offer limitless streaming to people with dementia at reduced prices or for free. They also urge the Government to create an independent, non-political Ambassador for Dementia and Music, who would lead a dedicated task force to deliver “universal access to music” for people with dementia.

“People with dementia often live in a silent world, yet music can bring a person back to life,” said Neil Utley of the Utley Foundation, one of the funders of the research.

“The ability to connect to music is an innate aspect of being human; having a diagnosis of dementia need not undermine this.”

Produced by ILC-UK’s Commission on Dementia and Music, the report examines the existing offer and the future potential for using therapeutic music with dementia.

The number of people living with dementia is expected to reach one million by 2025, and many of these will suffer neuropsychiatric symptoms, such as agitation, depression, apathy and anxiety. The annual cost of dementia to the UK is £26.3bn and this is expected to exceed £50bn over the next three decades.

The researchers conclude music and dementia is currently the terrain of devoted advocates operating in a “complex and poorly coordinated ecosystem”. They found specialist music therapy provision is “sporadic” and estimate that good-quality arts and music provision is currently available in just 5% of care homes.

“We want to see provision reaching all people with dementia, including the most vulnerable individuals who may not have family or friends to speak on their behalf,” the authors add.

The report concludes the sector would benefit from increased funding, which should be supported by more research into the cost effectiveness of such programmes – recognising the tight budgets of local authorities and clinical commissioning groups – and more investment from philanthropic trusts.

It also calls for a large-scale campaign to raise awareness of the value of music interventions, and a national database to summarise local provision for people living with dementia.

Sally Bowell, Research Fellow at ILC-UK, added: “Music should not just be considered a nice-to-have, or an ‘add-on’. Music has tangible, evidence-based benefits for people with dementia, such as helping to minimise the behavioural and psychological symptoms of dementia, tackling depression and anxiety, and, importantly, helping to improve quality of life.

“We want to raise awareness of these important benefits and rally organisations and individuals alike to help champion access to music for people with dementia.”

I read this and I shudder a bit. I have seen too many staff members at care facilities randomly turn on "music-from-a-person's-era" from a corporate-selected streaming service and walk away, having spent no time trying to discover what the person might actually *enjoy* hearing. Do they like classical music? The blues? Cajun? It's not all the same and many of the music choices are made based on what the staff wants to hear. The idea of streamed music in general scares me. Many elderly people have no idea how to access streamed music, (but they may indeed remember how to put a CD or vinyl album into/onto a player.) I think allowing the resident to retain a bit of control (provided they still have the skills) over what they hear is vital. My mother--- thank God--- shows no sign of dementia, but she would be miserable in a care facility in which music choices are mostly made by a twentysomething. She has loved music all of her life and specifically loves opera. Her tastes lean toward specific singers and specific productions and I shudder to think what she might have to sit through in a place that sees no difference between genres or artists. It's not just music that's important. It's specific music that speaks to the *individual*.
I fully agree with your point Claudia, but would suggest that it is worse than playing "music-from-a-person's-era", but playing music from prior to that person's era. Those who were involved in Skiffle and the British Blues explosion, which led directly to the Rolling Stones, are now in their 80s (John Mayall, of the Bluesbreakers fame) toured the UK last year at the age of 84. My mum who died in a care home at the age of 82 (no dementia) used to get very frustrated by this idea. She was 16 when the war ended, and that was when her musical education started. Frank Sinatra, skiffle, rock & roll, not Billy Cotton's Band Show and "Vera sodding Lynne" (her invective, not mine)!