A more creative role for producers

Once a curator, now a producer, Mary Paterson calls for the artist-producer relationship to be re-imagined as something more creative – and less about social media. 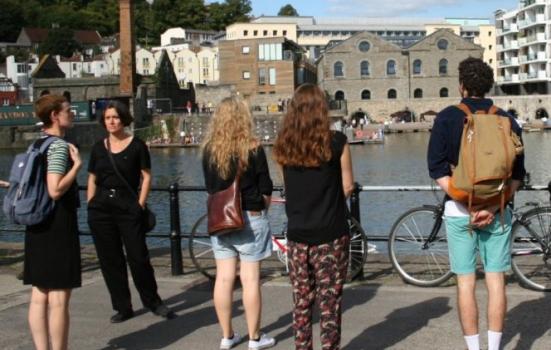 A Walk of View by Mary Paterson and Genevieve Maxwell
Photo:

Do you remember when curating was a type of administration, and not a form of artistic judgment? The term ‘curator’ began to change in the 1990s when artist-curators replaced the stereotype of a dusty caretaker of other people’s ideas. But curating has undergone a more profound transformation since. The word has entered the lexicon of the lazy copywriter ‘curating’ content for the inexhaustible web. It’s gone from being a way to explore networks of power to a way to signpost your own. Accordingly, artist-curators no longer challenge institutions – they run them.

At best, then, the modern producer is someone who works closely with artists to make things happen. At worst, they are a gatekeeper...

These are some of the reasons why I stopped calling myself a curator a few years ago. I preferred the term ‘producer’. Not only did it highlight the caretaking parts of my job, but it was also a nod to the politics of collaboration. I work in live art, a diverse set of practices approached most often from one of two routes: visual art or performance.

Coming from the former, I was immediately drawn to the group dynamics the latter makes more explicit. Calling myself a producer was a way to avoid the individualisation of the fine art world, to sidestep the curator’s connotations of power, and to explore methodologies of collaboration.

But, now, I fear producers are going the same way as our visual arts cousins. Art organisations focus increasingly on the producer role, with Edinburgh Fringe and LIFT, for example, running professional development schemes for producers alongside or even instead of programmes for artists. Meanwhile funding programmes like Unlimited require artists applying for small R&D grants to have a ‘producer-relationship’ in place.

What do producers do in this context? Are we supporting artists or eclipsing them? Unlike curating, the changing role of the producer seems less motivated by theory than by external pressures – namely, an increasingly competitive, capitalist working culture.

The competition is partly down to money. Since 2008 there has been less money to go around the publicly funded arts sector. Not just the government, but also charitable trusts and foundations, individual donors and corporations have all felt the squeeze. In this climate, artists have little choice but to cup our hands to the usual suspects, for diminishing returns. At a recent Arts Council England (ACE) meeting I was told to expect to “do more and more [work] for less and less [money]”.

Meanwhile, measures brought in by successive Conservative governments have changed the way we articulate the value of artistic work. ACE’s Grants for the Arts application form now requires more detail about marketing than about artistic ideas. More worryingly, as university funding is cut and fees rise, arts schools must compete in an aggressive marketplace. Advertising to 18 year olds staring down £30k of debt, this market naturally emphasises employability over ideas, productivity over research – and style over substance.

Feeding into all of this, the rise and rise of social media means that none of us can ever step off the rollercoaster of self-promotion. If you haven’t boosted your post today, then Facebook will remind you just how many people you failed to connect with. And if an artist’s retreat doesn’t appear on Instagram, how do you know anyone heard you scream?

The net result is that artists need producers. They need someone who will manage their social media page, administrate their MailChimp account, curate their Instagram profile, not to mention fill out endless funding proposals. Artists have always needed assistants to help in this way. But perhaps something has changed. These tasks are increasingly demanding, specialised and competitive. Artists don’t just need help, they need guidance. “Even if the scale of your work is small,” says Unlimited, “we expect the applicant will require [producer] support with certain aspects of their proposal.”

At best, then, the modern producer is someone who works closely with artists to make things happen. At worst, they are a gatekeeper whose authority is derived from administrative skill, gained in a competitive marketplace, modelled on capitalist ideals. The irony is that many producers are artists, just like artist-curators before them. The changing role of the arts producer is not just a discipline about the artist then, but also a discipline of the artist.

As such, it is a threat to the values and processes of creativity as an affective (that is, intersubjective) force. For those of us who believe in these values, our response must be to refuse the very premise of the culture that pays us for our labour. This means more than simply sharing stories, but also sharing resources, knowledge and contacts. More than sharing space, but also sharing ideas, hopes and failures. More than aspiring for success, but also changing how success is measured.

I’m currently working with Chisenhale Dance Space to set up a Producers’ Mutual – a collaboration for producers of different disciplines and, crucially, different ages, genders and identities. It will explore how to avoid the pitfalls of competition, individualised productivity and death by social media announcement.

The first stage is a mapping exercise to record the models that already exist. By the autumn, we hope to have a pilot project that supports producers, artists and audiences to be as creative as possible.

This is not a new idea. We are building on rich histories of collectivisation, as well as more recent initiatives, such as the Producers’ Gatherings organised by Xavier de Sousa and Sally Rose, and the UK Theatre Producers Facebook page. But the context is changing beneath our feet. The question remains whether we can remain anchored to our values without being swallowed, like curators, into the quicksand of capitalist discourse.

Mary Paterson is a writer and producer.
Tw: @mepaterson

This is an interesting article but it does come with an enormous assumption, that art is in opposition to, and in some way compromised by capitalism. It is an assumption that I have seen made often and it does need to be challenged. Of course, many people working in the arts are left-wing and above average are socialists/explicitly anti-capitalist. Quite a lot of work is created from a political impetus and that impetus tends to be left-leaning. But that does not mean that art is fundamentally at odds with capitalism. If you look across the whole arts sector (encompassing all art forms and methods of production) a significant proportion of it does not in any way assign itself to socialist principles and much of it exists quite happily in a capitalist and/or commercial environment. (The author might not like these forms of art, but that is a matter of personal taste, rather than fact). If you look today, and through history, you can find examples of successful artists who were also great entrepreneurs and administrators(including a certain William Shakespeare). The question I have in response to this article is, actually, why should an artist need a producer to help them navigate the beaurocratic and administrative aspects of their work? Why do we assume (and even encourage the idea) that artists are too.. artistic?...senstive?...frail? to send a tweet every day or fill in an application? There's plenty of fantastic artists out there who can do all these things. For the record, I am a centre-left leaning administrator, not a Daily Mail reader in disguise!